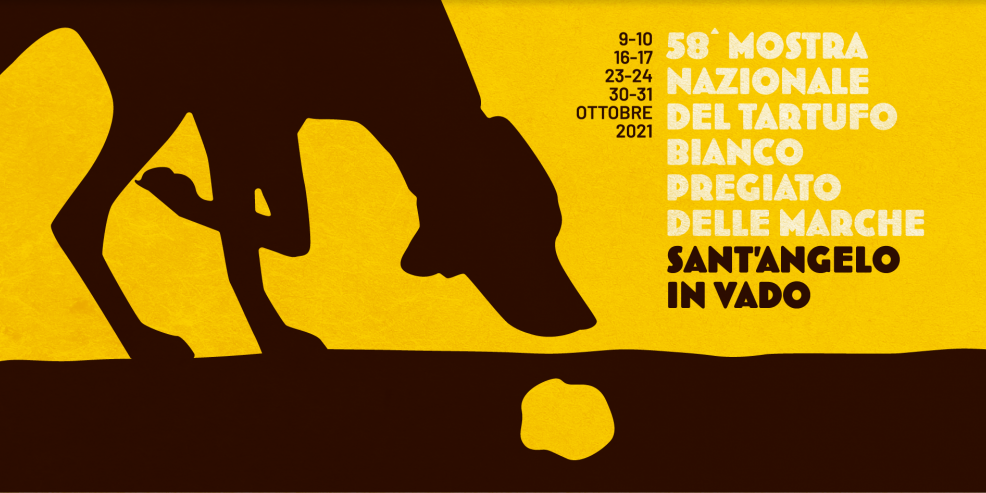 This weekend's Golden Truffle of the National Truffle Show was a mix between the aroma of the precious tuber and the roar of the engines of the international motorcycle rally. In fact, there were characters worthy of the best two-wheel paddock on stage to receive the award: Paolo Simoncelli, father of the "Sic" e team manager of Sic58 Squadra Corse, Mauro Sanchini, Sky entry for MotoGP, Carlo Pernat, agent of many pilots and historic paddock man, Giovanni Copioli, president of the Italian Motorcycle Federation, Matteo Ferrari, winner of the first MotoE world championship in 2019, e Raffaele Brugnettini, Ceo di Green Power System, main sponsor of the Moto team 3 Cip Green Power. 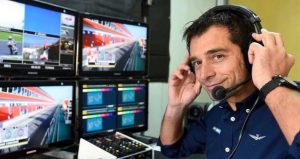 “When on the track you overtake corners and throw yourself in, feel that water in your mouth which is the same as you feel when they bring you a truffle dish " he said Mauro Sanchini when he received the Golden Truffle

Carlo Pernat he said instead astonished: “This place is wonderful, here, in addition to the truffle, you can also smell history. I made a good supply of truffles for gifts to friends, with truffles you always look good ".

Under the skilful management of Francesco Belfiori, the guests opened up to jokes and anecdotes that told a glimpse of life behind the scenes in the world of engines.

Paolo Simoncelli he also remembered his son on the eve of the anniversary of the 10 years since his disappearance: “Marco has remained in people's hearts, it's like meeting him every day among the people, it's a strange thing and I often wonder afterwards too 10 years: what Marco did? He was a smiling and happy boy who was chasing his dream, a sincere person who immediately struck, perhaps also for its curls. As a parent, I have no regrets for Marco. The day of his last thing though, on the Sepang starting line, he had a towel on his head with the number backwards, I wanted to shoot it, but then I didn't do it for fear of ruining his concentration ". 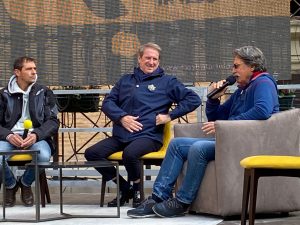 With the big names on stage, the debate then moved on to sports issues, like safety on the track:

Giovanni Copioli, president of the Italian Motorcycle Federation stressed that "as the IMF we educate to respect the opponent and to follow the rules on the track. The Federation must train people and then pilots. Safety on the circuits has increased but we need to improve ".

Carlo Pernat, historic driver manager was more decisive: “When there is bad behavior on the track, it is important that the race direction make even unpopular decisions. You can't run in 38 O 36 motorcycle on the track, you have to go back to the past when you ran a maximum of 26 ".

Matteo Ferrari, MotoE world champion confirmed this reading: "From the inside we feel that we need strong sanctions, to ensure the safety of pilots, especially with the MotoE which is lighter ". 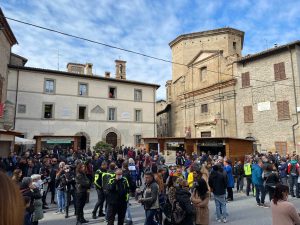 Another star of the day Mauro Sanchini, former MotoGP rider and commentator for Sky Sport: “Comment with the pleasure of commenting, also to relive the emotions of the races. It's not like when I was on the track, the adrenaline of the starting grid is a unique experience. The passion for commentary was born when I came back from school with my scooter and for the Urbino descents in my head I was already commenting as perhaps a race ".

Also on the stage Raffaele Brugnettini, who with his Cip Green Power has a team in Moto3: "Passion, innovation, technological development: these are the things that push a company to invest in the world of motors. The Moto3 and our team then give us the visibility we like to have ".

The "Motorcycles and Cars" Tour of Italy at the Tomato Ball
17 October 2021
News summary
Last news
follow us on Facebook!